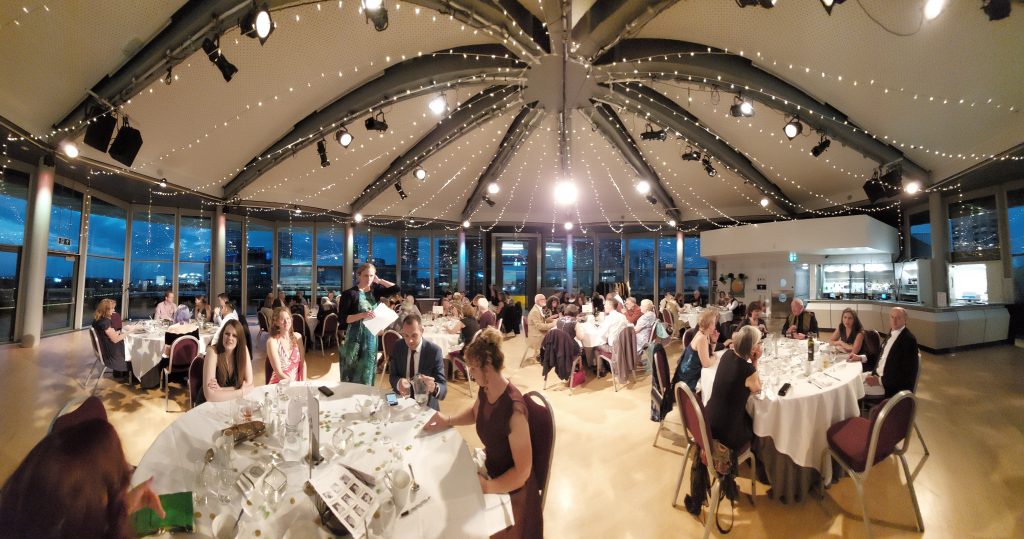 In this special event report, NWTN Chair Laurence Bisot reflects on our big anniversary bash.
Make sure you read all the way to the end for photos and videos of the evening!

The NWTN was founded in 1985, and in 2020, we decided to celebrate our 35th anniversary in style, and, at the same time, to thank Heidi Kerschl for 30 years of involvement in the Network, in varied roles on the Committee and as Chair since 2016. Because of the pandemic, we had two more years to organise the event and to make it a bigger celebration of the Network, its history and its community. We started to collect archives of NWTN activities through the years, and we invited former members of the Committee, such as former Chairs Päivi Turunen and Silvia Ferrero. The current and last ITI Chairs, Nicki Bone and Paul Appleyard, were also there as guests of honour. In the end, we gathered together 80 people, whose membership ranged from 37 years to one day!

Rod Riesco, who created the “North-West Translators’ Circle” in 1985, couldn’t be with us for health reasons, but he sent us some words which were read out to the guests, and he was granted lifetime membership in recognition of his contribution to the NWTN, as was co-founder Norbert Hermann, who also attended the event. Heidi Kerschl received gifts for her 30 years of service on the Committee.

The Compass Room, in The Lowry theatre in Salford Quays, was a spectacular setting for an emotional and convivial reunion, and after a delicious three-course dinner, everyone joined in on the dance floor, with tunes covering the last four decades, until 1am.

The organisers, Kate Lo (Events Lead) and Laurence Bisot (Chair) thank the whole of the NWTN Events Team for their help and support.

And here are some reactions from our guests:

What can I say… overwhelmed, proud, blown away… #nwtn35 was certainly worth waiting for. A fantastic evening organised to perfection by the amazing NWTN events team lead by Kate Lo, hosted with inimitable flair by NWTN Chair Laurence Bisot, and attended by many of my favourite people in the UK translation industry. Thank you North West Translators’ Network for your warm and generous acknowledgment of my contributions to the network over the last 32 years.

What a night it was!
I had a great honour and pleasure to be invited to the North West Translators’ Network a.k.a The Friendliest Professional Association ever Anniversary Ball!

I had a fabulous evening at the North West Translators’ Network 35th anniversary dinner on Saturday. The venue was stunning, and it was great to catch up with colleagues I hadn’t seen for months, even years…

2 years later than planned, I had a fantastic evening on Saturday at the North West Translators’ Network 35th (37th!) Anniversary Dinner. Great bunch of people (…) stunning location, and went away feeling as inspired as always after an NWTN event.

Thank you to members who shared their photos and to Dot Roberts for the video!

Thank you also to Melanie Briens for her video recap of the night!