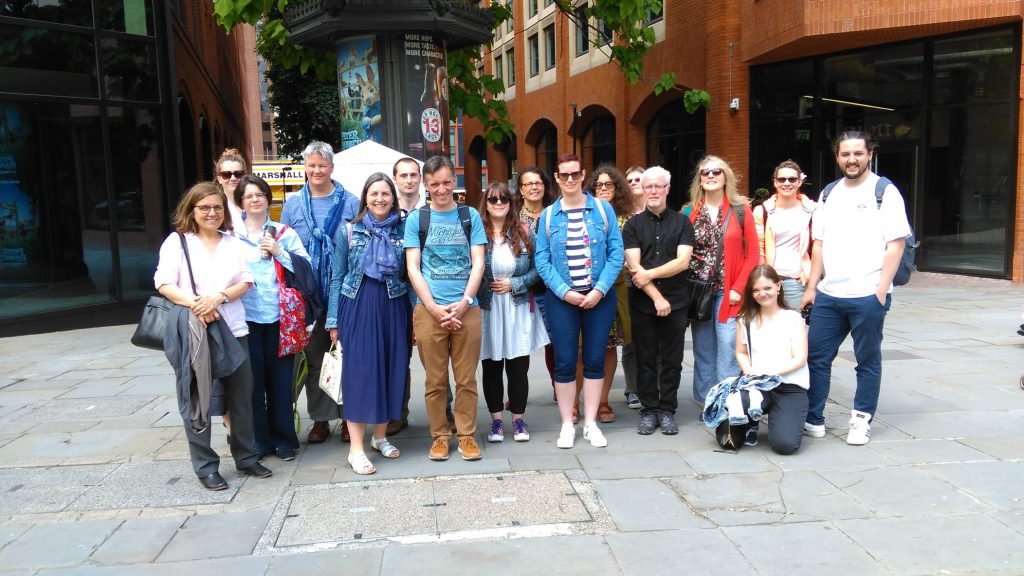 So what have the Germans ever done for Manchester? Quite a lot, as a group of about a dozen NWTN members, plus-ones and fellow travellers from as far afield as Swansea, London and Chester found out in the course of a 1.5-hour guided tour on the eve of the NWTN’s Social Saturday on 22 June 2019: punk music; communism; one of the UK’s oldest symphonic orchestras; paediatric medicine; literature; banking; world-class goalkeeping; new-fangled continental ideas about potential synergies between science, engineering and business. (Not to mention their contribution to an ITI Award-winning regional translators’ network with a strong German contingent.)

On Saturday morning, we reconvened for a more general tour at the recently rebranded Science and Industry Museum, an institution that perfectly encapsulates Manchester’s industrial heritage and post-industrial reinvention as a tourist destination and (pop-)cultural centre.

Thanks to our two extremely knowledgeable professional guides, even the long-term Mancunians among us learnt a thing or two they hadn’t known about their city. On Saturday, Pauline Lloyd added extra value to her tour of historic landmarks and buildings by sharing her experiences as a multilingual guide for English-, French- and sometimes Italian-speaking groups, setting the scene brilliantly for our Social Saturday session on ‘Translation for Tourism’ at the YHA in the heart of Manchester’s historic Castlefield area.

The workshop was led by Gareth Norbury and Janice Crossfield, two experienced colleagues who gave us an insight into the challenges and opportunities of working in a domain where the fine line between translating the words and translating the message must be tread with particular care. In tourism, the human touch is essential to strike the right balance between the alluringly exotic and the reassuringly familiar, between local idiosyncrasies and universal accessibility. Gareth, who lives in South Tyrol, compellingly showed us how to talk the talk and walk the walk by using the Social Saturday as a stopover on a hiking tour.

In an exercise that was both enjoyable and instructive, we were then given the chance to test our own skills on a selection of tourism-related materials provided by the organisers, and to share our draft translations with the rest of the group. ‘Morgenstund hat Gold im Mund’ – the German equivalent to ‘The early bird catches the worm’ – literally translates as ‘The (mouth of) the morning hour is filled with gold’. (So now you know why Germans like to get up at the crack of dawn and claim all the deckchairs by the pool!) But how to translate it when it’s used as a tagline for a stunning sunrise, with not a single bird, or a single worm, in sight? Would a translation based on a different proverb work: ‘Every cloud has a golden lining’? Or how about a creative take on the meaning of the original: ‘Early risers seize the day’…?

Historically, Manchester has been a breeding ground for radical thinking (the right to vote, the 5.5-day working week, women’s suffrage…) and brutal repression, as in the 1819 Peterloo Massacre. With anxieties about the double whammy of Brexit and progressive automation looming large for many of us, the whole weekend served as a welcome reminder of the profoundly human desire to see new places, meet new people and twist our tongues around unfamiliar words – not least because Pauline repeatedly assured us that there would always be a need for proficient linguists in her field.

For me personally, the event was well worth the 4-hour train journey from South Wales. As is often the case with translation-related CPD sessions, my only complaint is that the workshop was over far too quickly.