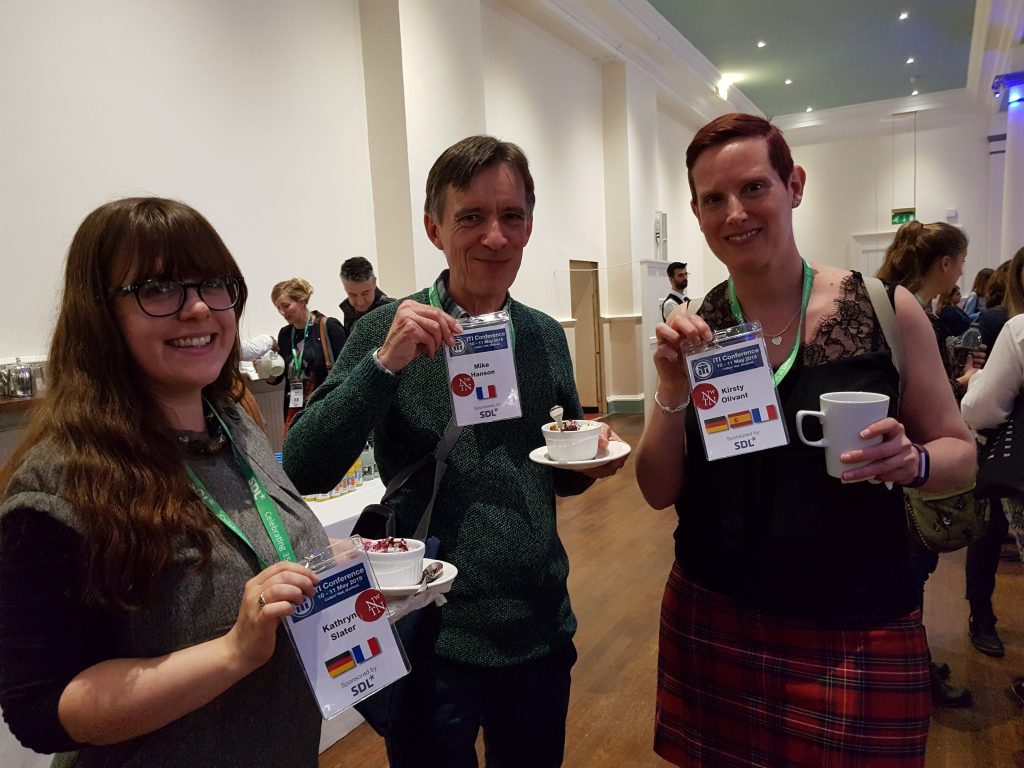 As a first-time attendee and relative newcomer to the profession, having taken the plunge into freelance work in April 2017, just before the last conference, it was with slight trepidation that I hopped on the short, scenic train ride to Sheffield for the 2019 ITI Conference in May this year. Would the sessions be relevant to me? Would I be able to pluck up the courage to speak to anyone? Would my garden-variety impostor syndrome simply be confirmed by the experience?

But I needn’t have worried: within about 5 minutes after finding my way to the conference venue at the impressive Cutler’s Hall, I had already spotted several friendly faces, and soon felt at home, as NWTN had a strong presence in Sheffield. There was a good cohort of us there, not only as attendees but also presenters, with Angela and Heidi giving sessions on legal translation and taking an “outside the box” approach to professional development respectively. It was also great to see NWTN win the Regional Groups and Networks Event/Initiative award for the successful “Social Saturdays,” which was presented at the conference dinner on Saturday night.

There was a packed programme, and I tried to go to as broad a range of sessions as possible to get a good idea of what’s going on in the profession beyond the North West. Perhaps unsurprisingly, there were several sessions with a focus on machine translation and PEMT, and I found the opening session from Andy Way, a professor at Dublin City University, a very useful overview of the technology behind neural MT, and what it (currently) can and can’t do. Whatever your feelings about MT, knowledge is power. Slightly unexpectedly – as I was expecting it to be more of a hard-sell – I also really enjoyed the “Trends in Translation” session given by Peter Reynolds from MemoQ. In addition to making clear his view that translators will be in control of new technologies as part of an “enhanced” environment that helps rather than hinders their work, he also talked about improvements in voice recognition technology and how this is a much more easily accepted productivity tool – partly because it harks back to a bygone age where many translators worked via dictation. That said, I have since given “Hey MemoQ” (voice recognition which works via an iOS device direct to MemoQ software) a go and got some pretty funny results… maybe they haven’t yet validated it for west Cumbrian.

Several of the sessions also had a welcome practical focus, including the closing talk by Karen McMillan Tkaczyk, which was an enthusing call for translators and interpreters to be more positive in the way they market and present their skills and services to clients. Many of her ideas and tips were quickly and directly actionable, such as not only requesting LinkedIn recommendations from colleagues, for example, but also taking the time to provide them for others, in the spirit of raising the profile of the industry more generally. Meanwhile, Maria-Jose Garea’s presentation on the role of “the reviser” in international organisations provided a fascinating insight into this important but slightly idiosyncratic area of translation, and would have been particularly useful for anyone considering a career in institutions like the UN or World Bank.

Apart from the sessions, I also found attending the conference to be a really valuable boost to my professional identity as a translator: if, like me, you work at home most of the time and rarely get to discuss the nitty-gritty of your work in person rather than over email or phone at a push, it can be easy to forget that there are many of us out there, in slightly different but related boats. The NWTN events are of course great for bringing us together throughout the year, and the subject/language-specific networks such as MedNet are invaluable for providing everyday practical support, but it’s quite something to be in a room of several hundred translators and interpreters and feel that sense of being part of a larger professional community. So for anyone who hasn’t yet been to an ITI conference, I’d strongly recommend attending the next one if you can. You definitely won’t be the only NWTN member there: hope to see you in just under two years’ time!