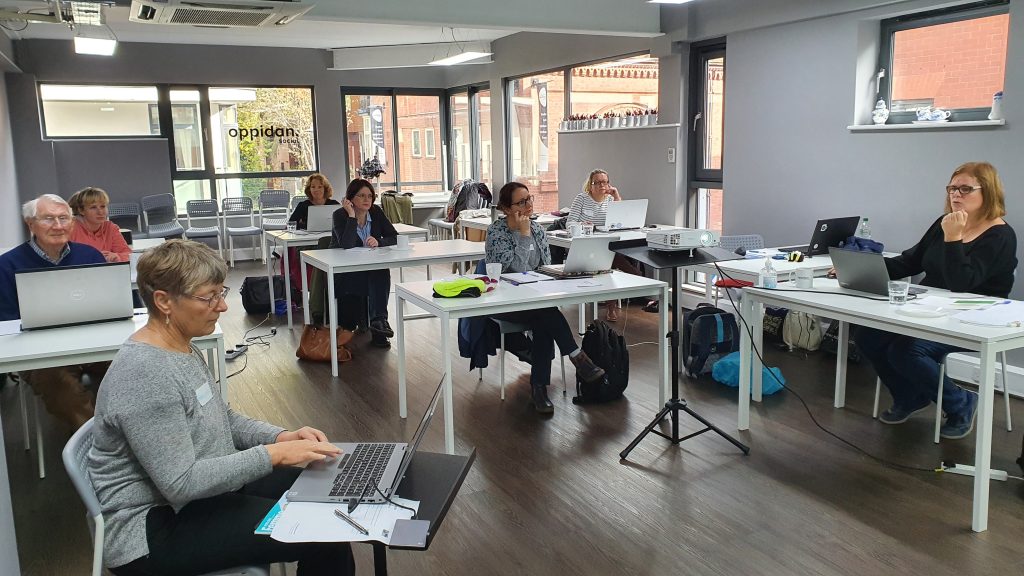 For Halloween weekend, the NWTN decided to help users to tackle the tricks of two monsters on the CAT Tool market: memoQ and Trados Studio. We invited Lone Beheshty, one of our members and a reputed trainer in both tools, to answer specific questions sent by attendees. It was also an excellent opportunity to review new features introduced in their new versions, memoQ 9.9 and Studio 2021. The event was held at Oppidan Social, in Manchester, where our members often meet for coworking sessions and which provided plenty of treats to support our working brains.

As the host of the Clinic, I was fortunate to attend both days and I learnt valuable tips, such as using a mouse to boost my productivity in memoQ: all this text appearing as by magic. How could I do without it before? On Sunday, there were fewer people as, sadly, some participants couldn’t join us. Lone helped me to tame Trados Studio, which I don’t use very often, by importing one of my clients’ projects and creating a new TM for future work. It doesn’t spook me as much, now. This was the NWTN’s first fully live event, and it was such a great pleasure to meet friends and colleagues face to face, some for the first time in nearly two years.

I have been using translation memory software since 2005. I started with Wordfast, but when Yves Champollion sold his business to an American company, I started to look at alternatives. That is when I attended an “Introduction to MemoQ” course/workshop led by Lone Beheshty in the ITI Milton Keynes premises; that was in 2010, I think. By the end of the day, I was converted.

So when I found out about the CAT Tool Clinic on MemoQ for intermediate to advanced users that the North-West Translator’s Network had organised with Lone on the 30th October, I booked myself on it there and then. At the time of booking, we were asked to list what we wanted to cover specifically.

We set up our laptops in the Oppidan centre in Manchester. Lone had come prepared with the list of our requests and we worked through the various topics.

We looked at how to use the language terminal to convert InDesign files, which several attendees had been struggling with. Lone explained to us how we could manage our translation memories and termbases using the export and import functionalities. Many of us did not know what the difference is between a working memory and a master memory, but Lone put us right. We also looked at term bases and how to enter terms using wildcard characters, i.e. using an asterisk [*] or pipe [|]. I personally discovered how I could use a template for a client or a specialism to save me having to select TM’s and TB’s every single time. I don’t think I could have done it without Lone showing us what to do.

You might think that this is quite a lot already, but that is not all we covered, we also went over how to use the filter function in the Editor to find specific words in the source or target text, or how to work, import, and export with tracked changes both in the source and target text by activating the feature using the Import with options function, and how to do a monolingual check. We then turned our attention to the QA function and to Muses and their use. I had seen the Import Folder Structure option on my MemoQ version but was none the wiser as to what it was until this session, so simple when you know!

We touched on the use of machine translation software like Deepl. I must admit that I am rather skeptical about it, but it may come in useful as a productivity tool since Deepl does some of the terminology searches for you. I am not sure whether I want to invest in such a tool, but this may be the theme for my next course…

Thanks to Lone and the NWTN, I think that we all left the Oppidan having gained some knowledge and a better understanding of our MemoQ tool, so despite it being a Saturday, a great working day!

« Pricing Clinic with Susie Jackson
Happy New Year! A look back at the NWTN in 2021… »