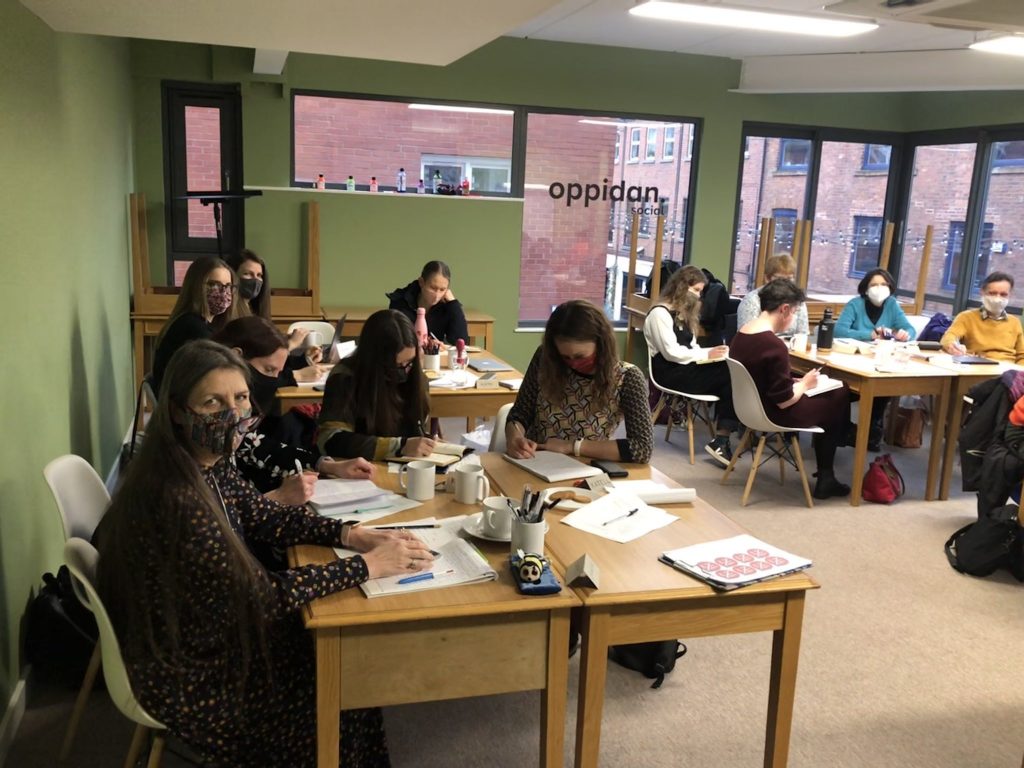 On 22 January, the NWTN held a creative writing workshop at Oppidan Social in Manchester. As the first workshop of 2022, it was lovely to be able to meet up in person with fellow NWTN members and challenge ourselves in an encouraging and supportive environment. The workshop was led by Alison Layland (MITI), a literary translator who works from German, French and Welsh, and Ros Mendy (MITI), who translates marketing material and children’s books from German and French.

The ability to turn a phrase is a useful skill to have in many careers, but as a translator, it is a necessity. Whether you are translating a technical document and struggling with the syntactic structure of a sentence in the source language, or translating a novel and trying to find an equivalent metaphor in your target language, being able to think beyond the words on the page in front of you is vital if you are going to create something comprehensive and enjoyable for the target audience.

Though I love writing, I rarely get the time to sit down and give it my full attention. One of my favourite pass-times is taking a pad and pen and letting the pen lead the way, so I was really looking forward to a full day of just that. The day was broken up into a series of writing tasks, each designed to challenge the way we think about language whether we were writing in our native language or not. To begin with, we focused on imagery. We were asked to write a few descriptive sentences about something we could see, a chair, a house, a glass of water. We were then asked to do the same again, but this time, without using their physical characteristics. Yes, houses are made of bricks and may have red doors, but that doesn’t make for an exciting read. Instead, we were asked to describe them based on our other senses. How do they smell, taste, feel? After this, we were then given a list of abstract concepts and asked to replace whatever object we had written about with one of these concepts. Could you use the words you had attributed to the house across the street and use those same ones to talk about hope? How is a glass of water like truth? I was glad to see looking around the room that I wasn’t the only one who found this difficult.

We then worked our way through character, sense of place, music of language and finished up with picture prompts. Each topic was broken down into a series of small tasks that forced us to write in a way we may not have written before and think of new ways to express our thoughts and feelings on paper. We often say that you lose a language if you do not use it enough, and the same is true of creative language. Everyone in the room that day could communicate effectively in more than one language, but we were all forced to awaken a portion of our brain that we had inadvertently let sleep.

Between each task, we were encouraged to read what we had written if we felt comfortable. Though I didn’t offer up my work for each reading, it was interesting hearing the ways in which people had responded to the tasks in their own way and the feedback from Alison and Ros was always welcome. We even had the chance to hear some of their work too. I think I can say we all left the workshop with plenty of ideas to work on at home!

Written by Rachael Barton
French and Spanish to English Translator