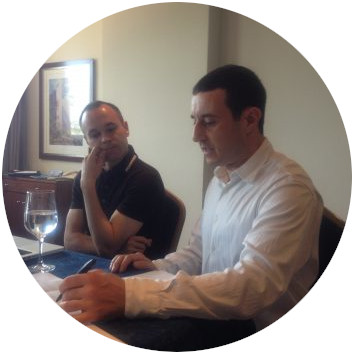 I live: in Manchester.

Both. I interpret between English and either Spanish and Portuguese and I translate both languages into English.

I’m not a translator who comes from a previous job where that profession forms the bedrock of professional knowledge and, thus, specialisation. The translations I have found I am most at home with have been in the areas of Telecommunications, Finance/Tax, Environment, Sport and Property.

2003 – I am a newly qualified interpreter with a DPSI. Not even on the NRPSI yet. Application still pending.

I’m roped in to do a job with a new footballer’s medical examination. Some young prospect called Cristiano Ronaldo. I am then asked to assist on his Premier League debut. Sir Alex Ferguson gives him his instructions to go on as a substitute – he tells him “Stay on the left wing”. I convey this verbally and even point to my left hand so Sir Alex knows I’m unambiguously hammering home his orders.

Ronaldo enters the field of play. He completely ignores the instruction and bounds straight out onto the right. I’m absolutely mortified. Outcome: United win 4-0 with two assists from the debutant. A bit of a hair-raising experience for me … a lifelong MCFC supporter.

I didn’t initially feel like I was equipped to translate. I have two DPSIs (2003/2006) but when the MOJ outsourced public service interpreting a decade ago, I took two DipTrans and I found I was very comfortable with translation. To have attained these four diplomas against all the odds gives me a very warm glow. In general, it is a great feeling to know so many situations are helped by language services, whether in legal interpreting of various sorts or the way our translation work helps business and, ultimately, our economy and society.

It is my true vocation. There’s a real sense of exhilaration unlocking the more challenging parts of any document and presenting it to clients who will remain unaware of the sheer intensity of the process that results in a readable document they can use for whatever purpose.

It also gives me a good level of insight into areas I would otherwise remain unaware of: the routes of people into my country and their experiences; insight into industries I would otherwise know nothing about, and also some fantastic interpreting jobs in sport that have enabled me to meet some of the players and even, once, lift the European Cup. I’ve therefore done that one more time than my own team has (soon to change, I hope!).

The places I have spent the longest spells are Northeast Brazil and Barcelona. I adore both. I have since been to other regions of Brazil and I have to say São Paulo was a really exhilarating place: the size of LA, the urban density of New York and the topography of West Yorkshire. The word ‘grey’ is over-used. It may be the prevailing colour seen as the plane lands, but there really is some truly vivid colour there once on the ground.

I am currently on an active push to take my currently strong levels of Catalan towards a point where I can qualify to translate. I am not quite ready to interpret in Catalan but I trust, and hope, I will also reach that point. All in good time.

I played Brazilian percussion for several years in the 1990s. This led to being asked to do a session for the band, Doves. I gathered some other percussionists for what was – at the time – just an earmarked demo without any guarantee it would make the album. It did make the cut and was then also released as a single. ‘There Goes The Fear’ is, to date, their biggest hit.