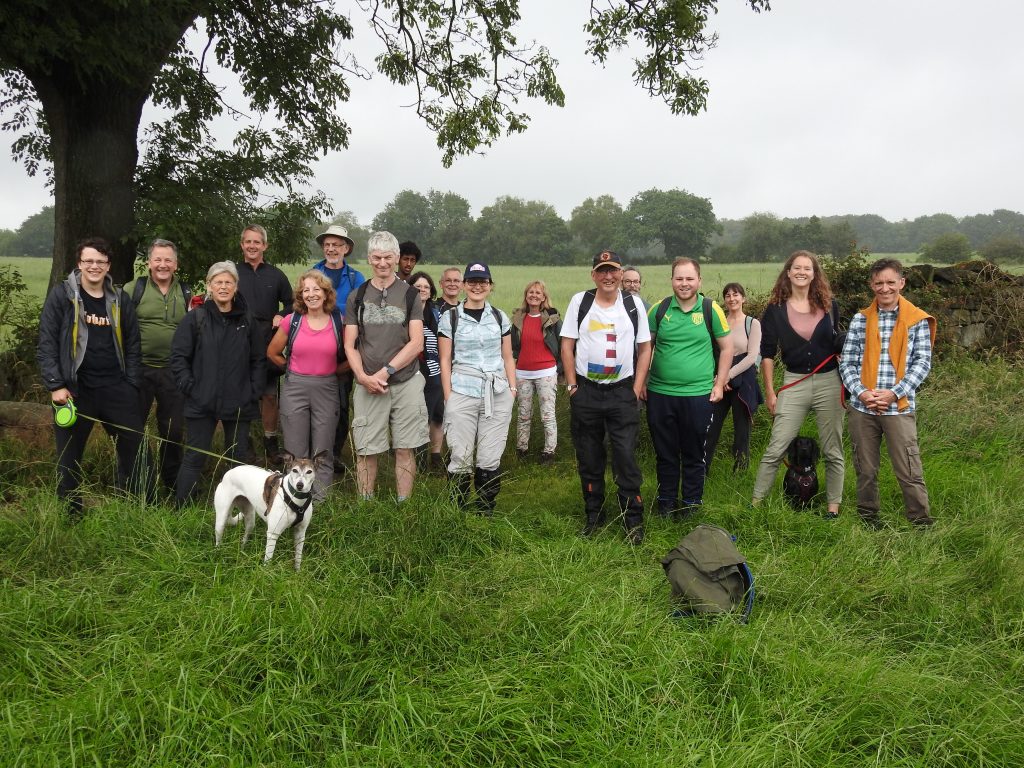 The idea of organising a combined walk between two ITI regional groups was first developed by WMG some years ago, when it organised walks with the East Midlands Group in 2012 and the Western Regional Group in 2014. This walk with NWTN was originally planned to take place in 2020 but the rules governing large gatherings meant that fixing a date was well-nigh impossible for that year. And so, mindful that the ITI walking weekend had been scheduled for early October, we decided to schedule it for the end of July.

Stoke on Trent is roughly halfway between Manchester and Birmingham. Although it is widely known as an industrial city, it is in fact a conglomeration of towns and villages with lots of green spaces in between. It is also extremely hilly, and a great place to walk and explore the outdoors.

Planning a walk for a large group (we had anticipated around 30) starts with the assembly point. The start point needs adequate parking and amenities such as toilets and a café or vending machines. Mike and I had initially walked a wonderful route based on Mow Cop, a prominent beauty spot in the area, but sadly there was insufficient parking and absolutely no amenities, so we had to return to the drawing board. We eventually settled on Biddulph Valley Leisure Centre and obtained permission from the manager to make use of their free parking and other facilities.

In order to control numbers, we asked that participants registered on EventBrite and our thanks go out to Katell Sevellec (NWTN) who had arranged this.  11 booked from WMG and 15 from NWTN. And so, we assembled under a cloudy sky with just a hint of rain on Saturday 31st July. One hour later we arrived at Knypersley reservoir, where we picnicked and met up with two further walkers from NWTN.

After lunch, we continued along the reservoir before climbing, via several stiles, to undulating, grassy meadows and lanes which brought us back to Biddulph. A former colliery line has been converted into a green byway and we followed this as far as the disused platform of Biddulph station from where we wound our way back to the leisure centre.

Everyone remarked how wonderful it was to be able to meet up again safely, in the open air, and in pleasant and varied countryside. Both groups hope to carry out another combined walk with their neighbours in the not-too-distant future, and my thanks go particularly to Mike for coming up with the idea in the first place, and for his persistence in our various forays to find the best route.